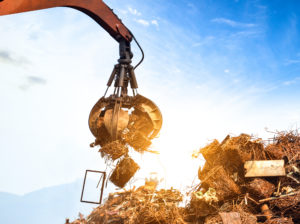 Zato, based in Brescia, Italy, designs and manufactures ferrous and non-ferrous metal recycling facilities that use artificial intelligence algorithms and IoT devices.

Paris-based LBO France announced the purchase of Zato in mid-September, via its Italian subsidiary Gioconda. The investment was the fifth in Italy by LBO France’s Small Caps Opportunities funds, after Vetroelite, Bluclad, Demas and Astidental Bquadro.

“We could apply our technology to a lot of other materials, such as plastics, cables and other waste,” Bernardin said.

But LBO France does not want to stop there. Zato’s products have the capability to scrap cars, but Bernardin is looking further ahead.

“In 10 years or so, we need to be recycling electric car batteries,” he said. “You need to adapt your equipment to make sure that you’re able to recycle batteries, which is completely different to recycling a car.”

Geographical growth is also part of the plan. Zato has already established itself widely outside Italy, which was part of the appeal for LBO France. The company has a presence in 25 countries, including the US and Japan, and generates over 85 percent of its turnover internationally.

“When you see a machine player able to do sales in Japan, you think maybe there is something here,” Bernardin said. “This is more than a young guy in his workshop doing business with his friends.”

To boost growth in North America and Asia, Zato needs to set up more subsidiaries, according to Bernardin. “People need to see the products and the company needs to have a local presence.”

M&A, however, is not on top of Bernardin’s to-do list, as he expects Zato to mostly be an organic growth story. “We feel there were already a lot of growth projects within the business,” he said.

LBO Small Cap’s approach is to add structure, especially in Italian companies, which are often family-owned. Understanding the product, and why it stood out from other players in the sector, was key to Venezia when negotiating the deal. “In the first meetings, those were the topics we focused on, before defining the price, which the management team appreciated,” she said.

Bernardin was hopeful that when the time comes to sell, there several avenues will be available. “We are quite open for exit options,” he said. “The market is growing and there is a lot of interest.”

There are “good ingredients” for profitability in the sector, and ESG trends are pushing deals forward, according to Bernardin. With Zato, the combination of ESG factors and the implementation of AI tech was the winning package for Venezia.

“They look forward, try to anticipate the market needs,” she said. “When you look at the machine from the outside, it looks like a big piece of metal, but inside it has such clever technology.”